Ron Jardin, a retired teacher, has built snow sculptures on his front lawn each winter for 30 years. He shares tips for making a stunning looking snow sculpture.

Each fall when the first snowfall is still months away people begin quizzing Ron Jardin about his snow sculptures.

“Neighbors and friends to this day ask me ‘What are you going to make?’ but I never tell them,” he said. “It’s always a secret.”

Jardin, 71, taught physical education and coached track and cross-country for more than 40 years, so many former students also drive by his house in the village of Mexico to glimpse his creations.

Crafting snow sculptures is actually one of Jardin’s more orthodox hobbies. He joined the rodeo team in college and for several years after becoming a teacher he spent breaks riding broncos with the rodeo. He and his family were involved in historical reenacting. And he’s constructed several authentic full-size tipis.

An avid outdoorsman, Jardin spends as much time as possible outside during winter, enjoying activities such as camping and skiing.

“I love winter,” he said. “There’s no bugs, your food doesn’t spoil and the bears are sleeping.”

He got the idea to build his first snow sculpture when his daughter, Annie, was less than a year old. Unbeknownst to his wife, Jardin played hooky from shoveling the driveway and built a snow woman in the yard.

“She thought I was outside enjoying my shoveling,” he said.

He gave the snowwoman a carrot nose, drank two bottles of lemonade to use the caps for eyes and added a scarf. He added a decorative bonnet swiped off a closet door. His plan was to set the baby in a pocket in the snow so it looked like the snowwoman was holding her and snap a photo. 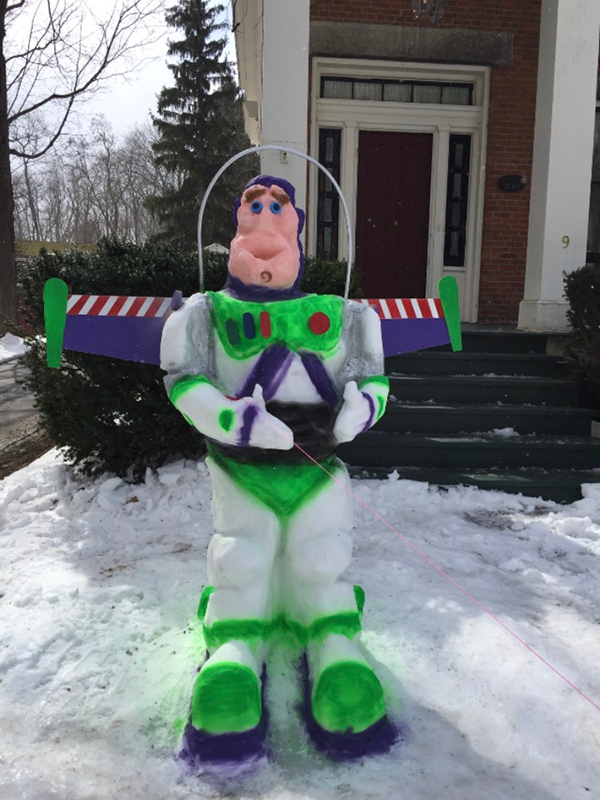 He asked his wife if he could take the baby outside. She agreed and bundled her up. Outside Jardin set the camera up and placed his daughter in the pocket in front of the snowwoman.

“And I went to focus and she rolled out,” he said. “And I caught her probably a foot from the ground.”

She was fine, but each time Jardin tried to take her picture she’d roll out again. He eventually managed to snap a few photos. He’s made at least one snow sculpture each winter since.

His creations have included Abraham Lincoln, Paul Bunyan and Goofy.

He’s constructed a giant chocolate bunny for an early Easter, made a replica of Donald Duck and built a man-sized snowman waterskiing. Once he built an entire snow family holding sticks around a campfire with real marshmallows and hotdogs on the sticks. Everything went fine until a neighbor’s dog pilfered one of the hotdogs. Last year his sculptures included Buzz Lightyear from “Toy Story” and Carl and talking dog Dug from “Up.”

Jardin usually takes a couple days to build his sculptures. Rolling the snow into giant balls — as someone might to make a snowman — leaves a giant snow boulder too heavy to lift, Jardin said. Instead he shovels snow onto sleds and dumps it into garbage cans. There’s usually enough snow in his front yard, but he sometimes has to borrow snow from neighbors. He packs the snow like he’s building a sand castle. Then he pours in about five gallons of water.

“And you make snow cement,” Jardin said. “It packs just like cement.”

If the snow isn’t good packing snow, he adds even more water. He flips the garbage can over and lets the concoction freeze overnight. The result is something not as hard as ice but much denser than what could be achieved by just packing snow.

If the sculpture he’s building needs to be wide at the base, he’ll put garbage cans side-by-side. If it needs to be taller, he’ll stack them. He fuses everything together with a mixture of snow and water. Jardin usually tries to build the sculptures as high as he can.

Using an axe, a saw and a steel shovel, Jardin hacks away snow, roughing out the basic shape. He goes back later and carves the details. He paints the sculptures with an acrylic latex spray paint that is easily cleaned up when it deteriorates and comes off in sheets. For areas that need to be white he uses a saw to file down the snow until it’s a crisp white.

For the details he uses a variety of items. The bow tie, glasses and dog’s tongue for “Up” were cut out of colored pieces of foam. The pupils of Carl’s eyes were 3-inch deck screws. For Buzz Lightyear he bent a piece of rebar and painted it silver to create the helmet. His eyes were milk jug caps. The dimple on his chin was made from a piece of cardboard cut into a spiral. And his laser beam was a surveyor string that ran from his arm and was staked to the ground.

Some sculptures have proven easier to build than others. Once the snow sculpture Jardin was working on toppled over and he had to start over from scratch. When he made Abraham Lincoln, he had to pound a 12-foot piece of rebar into the ground to keep the tall, narrow sculpture stable.

The sculptures typically only last a few days before they begin to turn to mush. One year late in winter Jardin built a giant chocolate bunny and when the ears began melting he shaped it into a giant Easter egg. A few days later he turned the melting egg into a giant yellow Peep. 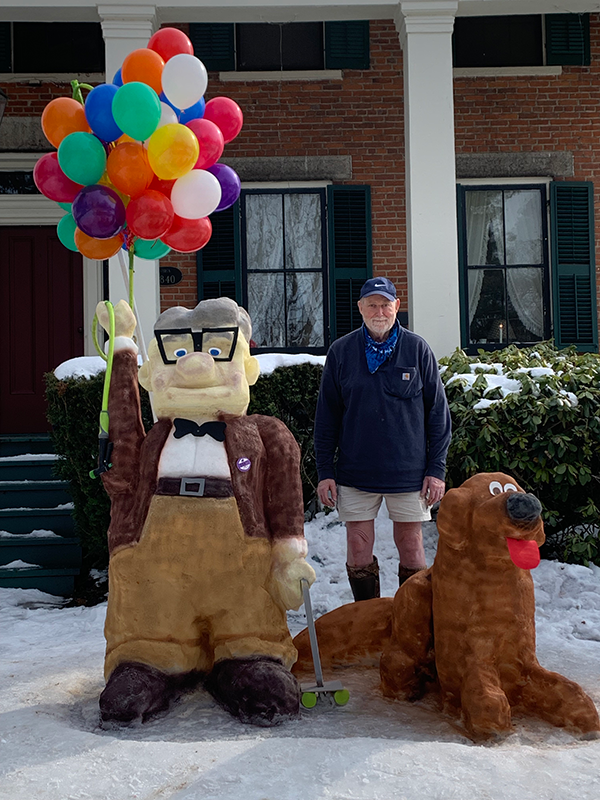 For “Up” he clustered four garbage cans in a giant square and then built upward. When it came time to lift the 40-pound block of snow for the head into place he recruited his wife and daughter. They used a 2×6 like a ramp and walked the block up, being careful not to let it slide off the other side, and secured it in place with snow cement.

Aside from having help stacking the snow, Jardin mostly prefers to work alone. He enjoys spending long hours outside chipping away at each sculpture. When he’s in the middle of working on a sculpture his wife often brings his dinner out on a paper plate for him. He sits in a folding chair, eats and goes right back to work.

Jardin uses props in his sculptures to make them appear more lifelike. For his snow family that meant real wood and a red floodlight for the campfire, as well as real hotdogs and marshmallows on sticks. For his water-skiing snowman that meant real water skis and a tow rope.

For “Up” Jardin used several dozen real balloons and a piece of garden hose for the string. The balloons and hose were supported by a camouflaged piece of white PVC pipe.

After years of building snow sculptures and learning from one sculpture to the next the actual construction doesn’t take long and is the fun part, Jardin said. It’s coming up with an idea and planning out the process to build it that takes the most time.

The first year when he built a snowwoman to take a picture with his daughter Jardin didn’t think about making any other snow sculptures that winter. Over time he began making several each winter. He still enjoys building snow sculptures so much that even after all these years it’s typical for him to construct three or four in a season if the weather cooperates.

“Now if there’s snow and I feel good I’m out there,” he said.