Winter is no reason to stop biking. With the right clothing, equipment and accessories, you can pedal until spring.

“Regular tires won’t perform like ones with studs, just like a car,” he said. “But a fat bike is your best bet.”

He advises checking out the products sold by 45NRTH (https://45nrth.com) for wider, studded tires and spike kits.

Very experienced riders may do fine on regular tires.

“It is based on skill,” Murray said. “I ride year-round and don’t even go out in the snow with studs.”

He encourages winter bicyclists to affix lights to their bikes because of the season’s shorter days. Even if only trail riding, lights can help other cyclists see you better.

Ice bikes offer another option for recreational winter bike riding. Lisa Florczak of Buffalo initially invented and developed the bikes to help people have something else to do at The Ice at Canalside in Buffalo. She and her husband, Peter, operate Water Bikes of Buffalo (www.waterbikesofbuffalo.com/ice-bikes). 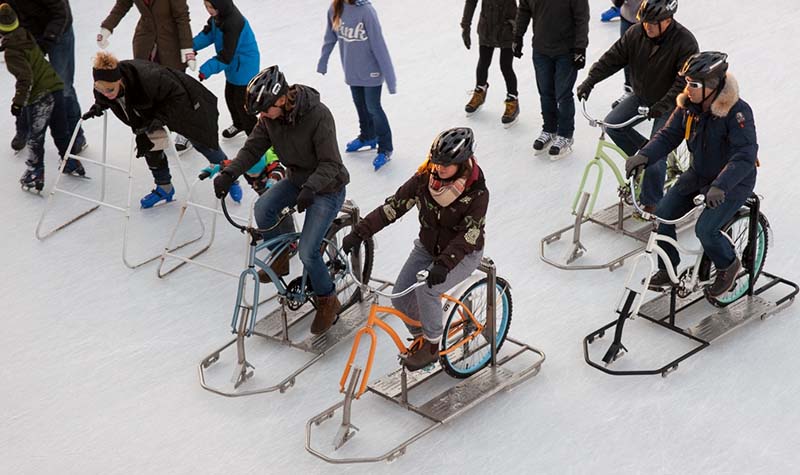 “In the spring of 2014, the Erie Canal Harbor Development Corporation asked all the vendors for ideas of things to do on the ice because they were opening a canal side ice rink,” Florczak said. “I wondered why you couldn’t ride a bike on ice.”

She worked with Charlie Roberts, a metal fabricator and owner of CJR Machine in Alden, to design and fabricate what became the Ice Bike, which Florczak patented. When the rink opened in 2014, Florczak unveiled the 18 bikes Roberts made for rental at the rink. Renters pay $12 per 30 minutes and share the ice with skaters.

“Pretty much, they were a sensation from day one,” she said. “They’re perennial down there.”

She has also sold about 70 Ice Bikes, mostly in the US and Canada, for recreational use only. An Ice Bike costs $2,100.

The Ice Bikes are based off a coaster bike that has no hand brakes or gears. The back tire is studded, and the front tire is replaced by a blade to complement the blades on the front of the frame.

Most of the bikes Florczak sold have gone to municipalities who operate a rental business at an ice rink. She views them as fun for anyone but also a way to get on the ice for people who do not know how to skate, lack the ability to skate or who must avoid falling for health reasons.

“There’s no learning curve,” Florczak said. “If you can pedal and steer, you can ride it. It’s been a great addition for people with some physical limitations.”

The bikes are made for children 10 and older. Florczak has not designed smaller-sized bikes for young children as she wants to limit the risk of collisions with skaters. She acknowledged that the ice bike concept is nothing new; however, her design was meant for recreation only and not for transportation like fat bikes.

In addition to the Buffalo location, Ice Bikes are available for rent at Dr. Martin Luther King, Jr. Memorial Park in Rochester (www.cityofrochester.gov/article.aspx?id=8589935137) for $10 for 45 minutes.