Skiers attracted to telemark, an alternative to downhill, cross-country skiing 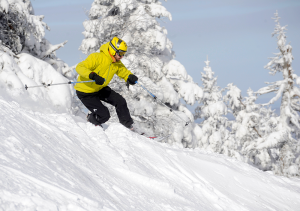 These guys and gals have raised a few eyebrows around the local ski slopes.

They can touch a knee to the ground while accelerating downhill. They demonstrate unusual or even unorthodox carving styles as their heels aren’t bound to the skis. They are often seen climbing the backside of a hill instead of using the chair lift.

If you ask them why they do things the hard way, expect to hear why: “Gotta earn your turns!”

These skiers, known as telemarkers, are greatly outnumbered by traditional alpine skiers and snowboarders, at least locally. But they have enjoyed a cult-like following. In recent years some local colleges have formed telemark ski clubs, attracting members who are seeking a new and unique challenge, or those who desire a sport that is more physically demanding.

Named after a region in Norway, telemark skiing essentially combines the rigors of cross-country with the thrill of alpine. It’s the way people skied — some for recreation, and others for transportation and survival — before chair lifts existed.

It’s a common misnomer that telemark skiing is simply using cross-county equipment to go down a hill. Telemark skis are lighter and more flexible than alpine skis and wider than cross-country skis. The bindings on telemark skis are only attached to the boots, leaving the heel free to assist with different types of turns and maneuvers. Unlike the bindings with alpine skis, which detach from the boots upon impact as a safety mechanism, telemark bindings remain attached with the boot after a fall or crash. Die-hard telemarkers put fabric over their skis to climb up a hill before skiing down. 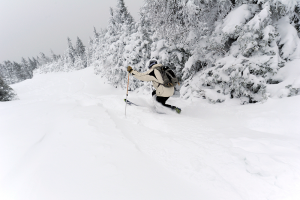 “You’ve got to earn your turns,” proclaimed Steve Burry of Cazenovia. He once climbed Mount Marcy, the highest peak in New York state, before telemarking down the mountain.

Jim Stover of Cazenovia was raised as an alpine skier. After sustaining a ligament tear in his knee during a soccer game, Stover got into telemarking as a way to help him rehabilitate and rebuild muscles in his leg. He lived in Vermont at the time and became a member at Mad River Glen, the Mecca of telemarking.

“With alpine [skiing] you are slicing and pounding your way down,” he said. “But with telemark, you are more in tune with the mountain and the way you get down it is an interpretation. With the hills we have around here, there’s great potential for telemarking to grow.”

Luca Neugebauer, a ski instructor at Toggenburg Mountain in Fabius, said one of the appeals of telemarking is the ability to explore un-groomed trails and get away from the crowded slopes. The other selling point is the variety — there are more than 160 different ways to turn on telemark skis.

“People have different ways of learning,” she said, “and this types of skiing give you more opportunities to learn different skills that can be applied to getting down the hill.”

Most downhill ski facilities don’t rent telemark equipment, and the gear is getting harder to find at ski shops. There was somewhat of a resurgence in the 1980s, but in recent years telemark skiing has been crowded out by the variations of downhill ski and snowboard activities (trick parks, half pipes), especially among youngsters.

Still, telemark has remained popular with veteran alpine skiers who are looking for a new challenge. Kara Burry, Steve Burry’s wife and a teacher in Cazenovia, regularly skied the Rockies in Colorado before moving to Central New York. She was intrigued by Steve’s stylistic approach with telemarking and thought it might be easier to learn on local slopes, which weren’t as high as what she was used to out west.

“I was full of myself and thought these mountains would be easy,” Kara Burry said. “Boy, was I wrong.”

For her, the only task that was easier with telemark skis was skating to the lift chair. She gradually improved and began to enjoy it more than alpine, mainly because she considered it artistic. She made a brief return to alpine skiing after her telemark boots broke two years ago. After returning to telemark skiing last year, she injured her knee in February. Burry plans to return to the sport after she fully recovers.

“I miss the exercise and the grace of it,” she said.