When people think of dog sledding, they usually envision a team of dogs pulling a sled across the frozen tundra in Alaska or the northernmost regions of Canada.

Or perhaps, there are those who dream of competing in the Iditarod, the 900-plus-mile race held in Alaska in March. However, for those Central New Yorkers who love the cold, the snow and dogs, but can’t get that far north, they can learn about dog sledding firsthand in Oswego County.

Visitors to these demos may be surprised when they see the dogs. They are not the Siberians or Alaskan huskies that you might see in pictures and movies.  Many sledders, Nancy Stark said, prefer a longer, leggier dog, like hounds or greyhounds, and their dogs have to have the strength and stamina for long runs.

“Dog breeders are not breeding for breed, but breeding to do the job. It’s all about performance,” she said.

Smith’s Adirondack Kennel, based in Boylston, will give short rides during these events as well, using a team of six. He has 20 dogs, some of which are semi-retired and only do these short treks.

For those small groups wishing longer rides, Smith schedules those at the Winona State Park, Lacona, and he can tailor the ride to fit the needs of those in the group, he said.

With nearly 30 years’ experience with sled dogs, Smith first got into the sport as a racer, doing sprint racing — 20- to 30-mile stretches — and will still do races from time to time. He started providing rides and demos nearly 20 years ago.

The speed and brute strength of the dogs surprises people. His teams can usually on average of 15 miles per hour.

Those interested in learning more about Adirondack Kennel, including pricing and the variety of programs it offers, can visit www.adirondackkennel.weebly.com.

The Starks offer demos throughout the area as well, and Nancy refers to their visits as “Dog Sledding 101,” in which guests can help harness the dogs, feed them, learn about the sleds, and view films. However, they do not offer individual dog sled rides.

The Starks and their dogs are popular wherever these demonstrations take them.

But yet, the Starks have a wealth of information on dog sledding to share with their guests, having been involved in the activity since the early 2000s, when they lived in Alaska.

The couple had decided to take a break from their careers, purchase a recreational vehicle, and travel the United States. Familiar with Alaska from an earlier visit, the Starks arrived there in September of 2001 and ended up staying for a few years. It was while there that Nancy first tried skijoring.

Wearing a pair of cross-country skis, she was hooked up with a bungee to one dog. She loved it, and eventually she was using three dogs. However, this led to an accident in which she dislocated her shoulder. But she was not deterred. Soon afterward, she tried dog sledding, and said, “That’s it. I want to do this.” And she did.

She had the opportunity to meet famed Iditarod racer and trainer Linda Plettner, and Nancy worked with her, likening it to an apprenticeship, for several years.

Eventually, the Starks decided to leave Alaska and began looking at places in the lower 48 states to relocate. Since both Ray and Nancy are from New York state, they prefer the colder climate here to places in the South, and they started looking to move back to New York.

With a consistent snowfall during the winter in the Tug Hill region, and plenty of acreage, they decided that Lacona would be a good spot to set up shop. It is here that they have set up their home, with their 17 dogs, kennels and equipment in a barn that Nancy calls her “she shed,” and space to train and run the dogs.

While Nancy works part-time as a clinical social worker, dog sledding is her passion. And it’s a passion that she loves to share.

“We’re just a gang of really cool dogs. We like to go out and have a good time, educate the public, and give people a nice experience,” Nancy said.

For those who want to learn more about dog sledding, visit the kennel or find out about an upcoming demo, reach out to the Starks through their website at www.cupcakemushing.webs.com. 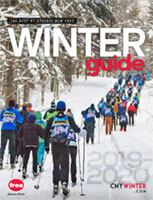