If it’s winter, it’s time for Carol Yerdon of North Redfield to shine

This is the time of year many Central New Yorkers dream about trading snow and cold for sunshine and sandy beaches.

Carolyn (Carol) Yerdon isn’t one of them.

Yerdon, 59, of North Redfield, is a special education aide for the Sandy Creek Central School District. She’s best known for her role as a Tug Hill weather observer.

In 1994, Yerdon saw a notice in The Syracuse Newspapers seeking weather watchers in Oswego County, which sometimes ranks as one of the snowiest regions in the country. She answered the notice and started measuring snow and sharing her data with the newspapers. Soon after, the local TV stations called, and Yerdon started providing snowfall information to WSYR-TV (Channel 9) and WSTM-TV and WTVH-TV (Channels 3 and 5). She later completed training and started measuring snow and recording snowfall information for the National Weather Service.

Yerdon isn’t a meteorologist, and like the rest of us, she isn’t sure when the first measurable snowfall or significant “snow event’’ will take place this season. But her attitude is one of “bring it!’’

“NOBODY, and I mean nobody, gets more excited about snow than weather watcher Carol Yerdon in Redfield [Tug Hill],’’ former WSTM-3 chief meteorologist Wayne Mahar noted on Twitter in early November last year. “Here she is breaking out the shovel for their first 1-2 inches of snow of the season.’’

Yerdon grew up in Memphis, a rural hamlet west of Syracuse, where the winters were relatively tame compared to what she has experienced in Oswego County. She moved to North Redfield in 1993 and quickly became a fan of the thick blanket of snow that settles over the region and of the winters that can begin as early as October and end as late as May. 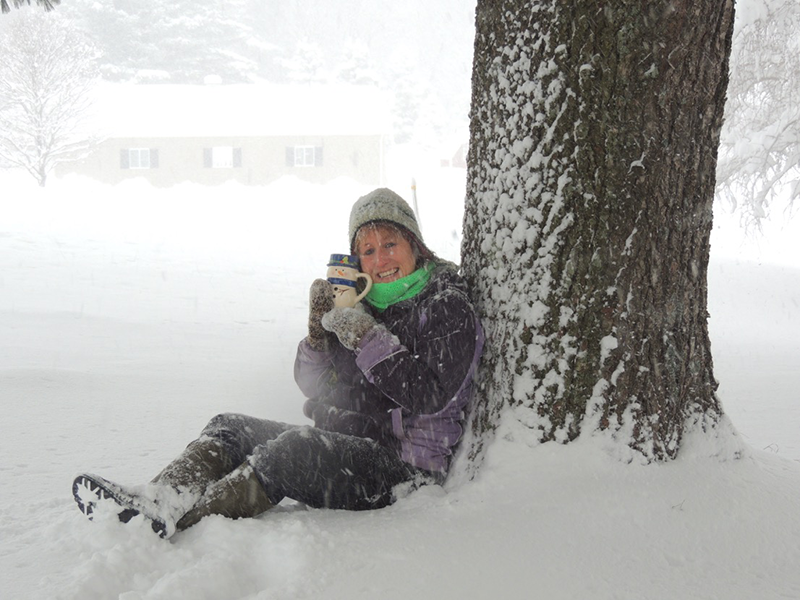 Once it starts snowing, she measures snow every 4 to 6 hours following National Weather Service guidelines. Her weather station is an open area of her property, out of the way of drifting snow. Her primary tools are a shovel, yardstick and snow board (a heavy plastic board placed on the ground). She pokes the measuring stick through the snow, until it reaches the snow board, and records measurements. The board is cleared of snow between measures, which are recorded to the nearest tenth of an inch.

Yerdon sometimes measures snow every hour or two during major snow events so she can give the National Weather Service and the Syracuse TV stations a better idea of the intensity of snowfall. “I really enjoy how they predict the snow and then I feel like I complete them by showing them, ‘you’re right, here it is,’’’ Yerdon says.

“I don’t usually have to get up in middle of night. If we get a significant storm, I might measure at 10 at night and I might get up at 2 in the morning and see if it’s still snowing. I do like to sleep a little bit,’’ Yerdon adds with a laugh. “If it’s a significant per-hour event, where we get 4 to 6 inches an hour, I do measure and report to the National Weather Service by phone. They like to know what’s happening right when it’s happening.’’

Yerdon (@cyerdon) uses Twitter to bring sparsely populated North Redfield and its winters to a wider audience. She has more than 5,000 Twitter followers and uses the platform to amplify the white stuff. “I quickly learned there was a huge interest from truly around the world to see our snow,’’ she says.

The Associated Press and The New York Times have called her for snow reports and updates.

Jim Cantore, a meteorologist for the Weather Channel, has broadcast from the roof of Yerdon’s house.

A French film crew visited several years ago to record footage for a documentary called “The Future of Snow’’ (Yerdon would like to see it but hasn’t been able to). Scroll through Yerdon’s Twitter feed and you’ll see her enjoying a mug of coffee or glass of wine in the winter wonderland outside her door or standing next to a snowman she made in April.

Significant snows mean snow days, and Yerdon has fond memories of schedule-free time spent at home with her son during his school-age years. With an average of five or six snow days annually, she considers she got more than 60 bonus days with him. “A snow day is whatever you make it,’’ Yerdon says. “You don’t have any plans. You’re forced to just sit back and stay home. In my case it’s not always staying inside. We’d go outside and play in snow and shovel and come in and bake cookies. The year he graduated, I realized it was his last snow day forever.’’

Keeping tabs on snowfall (and rain in the off-season) occupies a lot of her time, but Yerdon prioritizes other activities, like getting out with her dog, snowshoeing at the Winona State Forest Recreation Area, and photographing the region’s snow-covered landscape.

“Measuring is one thing,’’ Yerdon says, “but I really like to be outside. I’ve always been an outdoor person. I find snow exhilarating.’’