Although many birds have migrated to warmer climes for the winter, birding can still provide hours of activity outdoors.

Penfield-based photographer John Kucko calls birding “fascinating because there are so many varieties” but warns, “you have to have paramount patience to sit there and capture different birds. It’s addicting.”

Though many died-in-the-feathers birders look through binoculars to observe birds and then record in a notebook where and when they spotted what, Kucko prefers to capture the memory on his camera.

He enjoys the plumage of cardinals so much that a male cardinal adorns the January page of the 2021 calendar of his photos that he designed.

“It was in a snowstorm when I got this,” he recalled. “I think everyone loves cardinals and seeing them in the snow is so special.”

“Bald eagles are one of the great success stories of New York,” Kucko said. “In the early to mid-’70s, there was one nesting pair in New York state; now there’s dozens all over the state. It never gets old photographing them.”

She listed waterfowl, gulls and raptors among the major species groups that winter here. Luckily for birders, these species tend to spend a lot of time in the open.

Kocek added that this winter is expected to be a major winter finch interruption year, which we have not experienced since 2013.

“Large flocks of purple finch, pine siskin, and red-breasted nuthatch — I know, not really a finch – and some red crossbills have already come through and evening grosbeaks are just starting. We are hoping that we will see common redpolls joining soon as well. Head to a nearby lake or just check your backyard feeders for a fun activity to do safely with your family.”

Winter is a good time to spot hawks, too.

“Spring hawk migration starts the last week of February and runs into June,” according to Onondaga Audubon. “Peak migration is between the second and fourth week of April. Most other north-bound birds reach our area at the beginning of April, with peak being the middle of May. Fall migration starts in late August and runs through the end of November. However, you can bird all year round. Eagles can be seen in the area in January and duck migration gets started in February.”

Try these venues for winter birding:

• Beaver Lake Nature Center in Baldwinsville is “always a great place to go for a winter hike,” Kocek said. Beaver Lake boasts dozens of bird species among its nine miles of trails, including winter finches, common redpolls and evening grosbeaks. Bring along your snowshoes or cross-country skis to transverse the park while spotting birds.

• Derby Hill Bird Observatory in Mexico,) is an Audubon site. Many visitors go there for the opportunities to spot hawks and waterfowl.

• The National Audubon Society has designated the Great Swamp Conservancy in Canastota as an important bird area as it is a resting place for spring and fall migration. Explore the park’s seven miles of nature trails.

• Wild Center and Wild Walk in Tupper Lake offers 115 acres of birding opportunities, including the treetops trail, which includes a four-story tree house, swinging bridges, a “spider’s web” big enough for people and a full-sized bald eagle nest at the pinnacle.

• Onondaga Lake in Liverpool/Syracuse is designated as an important bird area. Look for wintering waterfowl, gulls, and bald eagles.

“Over 100 eagles can be observed on the lake at one time in the winter,” Kocek said. “Check out these birds from the Destiny USA parking lot or the newly opened southern portion of the West Shore Trail.”

Note that these venues may not have their visitor’s centers and other indoor attractions open. Some may require online ticket purchase and mask wearing, even though you are outside. Call before heading out to confirm you comply with any COVID-19 guidelines.

“These birds will be extra appreciative of a snack during the long, cold winter,” Kocek added. “Put out suet feeders to give an extra energy boost to migrating birds and woodpeckers during early and late winter. Also, keep an eye out for winter finches this year as they love to snack at feeders.” 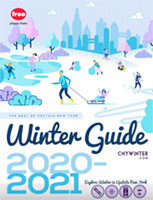